Why is handheld microphone technique so important for speakers?

Have you ever seen someone speak into a handheld microphone and yet been unable to hear them clearly? You’ve probably been tempted to blame the PA system. But what if I told you that the cause of this all too common problem is the presenter’s poor microphone use, not the technology.

Bad microphone technique is like bad breath.  You don’t know you have it, and no one else is going to tell you that you do

It’s almost certainly not all your fault. Probably nobody has ever taken the time to pass on the tips I am going to pass on in this post. 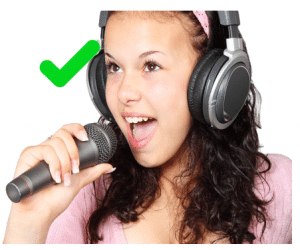 Speak into the microphone, not over the top of it

The second most common reason for poor microphone technique relates to how far you hold the microphone from your mouth. Hold it closer than one finger’s width, and you’ll get popping. Hold if further away than three fingers and your volume will tail off. It’s all too common for inexperienced speakers to start off with the mic nice and close but then to unconsciously move it further and further away as they continue to speak, resulting in a gradual tail off in volume. Keeping a consistent distance is a skill that requires repeated practice in order to become automatic.

The ideal microphone to lip distance is  1–3 fingers’ width

The third most common cause of poor microphone technique is speaking “off mic.”  This problem happens when you move your head to speak to the side but you fail to follow your head movement with the microphone. Remember what I said in tip 1 – for the microphone to do its job, you need to be speaking into it.

Always keep your mic and your mouth lined up

Again, this is easy to say but not so easy to do, especially when you are not used to speaking with a handheld microphone. The answer, as in tip two, is practice and feedback.

There Are Two Types of Speakers in the World: The Nervous and the Liars

There Are Two Types of Speakers in the World: The Nervous and the Liars

Storytelling for Speakers - Beware the Dark Side
Spring Templates