Some days you shouldn’t get out of bed to present…

Previous
Next
95
0
Filed under -
Archived Content
Two things have prompted this blog (which some might call a bit of a rant). Firstly, I’m sitting here typing on a laptop running on batteries because there’s no power to the building and there hasn’t been all night either, it appears. And secondly, at a big presentation I was giving yesterday the HDMI cable between my laptop and the rather lovely, huge LCD screens on the wall behind me cut out every time I stood on a certain spot on the floor over the wiring.The former I’m solving by running on batteries for a while (though I may have to go to a cafe at some point when the batteries run out!) and the latter I solved by replacing the HDMI cable with a VGA cable and a pair of emergency speakers I carried with me. (Sometimes you’re not paranoid – sometimes the world is out to get you!)But the loss of ‘tech’ on those occasions got me thinking.

Just about my all-time favourite statue. Makes me cry sometimes. I see it almost every time I’m in Italy.

Frankly, I have almost no time for those speakers and presenters who brag “I never use slides!” with an evangelical zeal and an assertion – implicit or explicit – that “It’s about the presenter, not the slides”. Behind that is the rather arrogant self-delusion that resorting to slides is somehow inferior. To them I say “If that works for you and your message that’s good. Remember that you only have one message. Have you considered what you’d do if that message was best communicated by slides? What would you do if your presentation was about some element of fine art? Try and get the audience to imagine Michelangelo’s Pieta without having seen it?” Slides work if slides are needed; no slides work if no-slides are needed. It’s as simple as that.

Similarly, I have no sympathy for presenters who mindlessly default to slides without thinking about whether those slides are there for the audience’s benefit or their own.

The hard part is deciding when/if slides are needed. And that, gentle reader, is the point of this rant. I’m not going to pretend that the reasoning/list below is comprehensive, or even the finished product, but it’s a reasonable starting point for a checklist, I think.

On the other hand, no-slides are often remarkably powerful. In my public speaking and presenting it’s not unknown for up to a third of my slides to be black, showing nothing at all.

No-slides are more appropriate when:

Like I said, I’m sure this isn’t a comprehensive list, it’s more a case of what cropped up in my mind as I was sitting here without electricity because of a power cut ðŸ˜‰ What’s your thinking ?

This is going to put the cat amongst the pigeons and piss off a lot of people, and I don’t mean it as rudely as it sounds, but it’s got to be said…

If you’re not using slides, are you sure it’s not just because you’re being lazy or arrogant? I’ve met (and sat through) some very mediocre presentations recently from people who didn’t need to use them because they were just telling their own, personal story.

And as I suffered, along with the audience, I couldn’t but feel that even if the slides weren’t used in the end, the process of structuring the content enough to put it on slides would have been a useful discipline.

As Eisenhower is reputed to have said, “In preparing for battle I have always found that plans are useless, but planning is indispensable“. 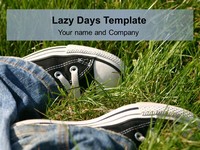 3 Tips for Creating a Great Presentation

What to present about when it can be a presentation about anything!
View all our free PowerPoint templates
easter templates