PowerPoint 1.0 was derived from a product called Presenter, which was developed by Bob Gaskins and software developer Dennis Austin from a company called Forethought. In 1987 they later renamed the product PowerPoint. It was originally developed for the Apple Macintosh. It ran in black and white, generating text-and-graphics pages for overhead transparencies.

Later in 1987, Forethought and PowerPoint were purchased by Microsoft Corporation for a massive $14 million. It turned out to be one of the best investments that Microsoft ever made.

I first started using PowerPoint in around 1993-1994 when the technology company I was working for upgraded from WordPerfect and Excel to Microsoft Office. PowerPoint was the third application in the set. At the time I used it to generate black and white bullet point slides (how could I admit it) which I would print out and then photocopy onto transparencies for use on an overhead projector.

By 1998 PowerPoint had become so engrained that I switched from producing reports in Word to producing them in PowerPoint where it was easy to add in pictures and graphs. Microsoft Word hardly gets used today.

If you are interested, it is well worth reading Jerry Stevenson’s A short history of PowerPoint.

So it’s out with the birthday cake and Happy Birthday PowerPoint.

21st Birthday speech for a sister

18th/21st Birthday Speech from a Parent

21st Birthday speech for a sister

18th/21st Birthday Speech from a Parent 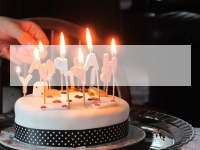