A Hidden Truth Has Power in a Presentation

Previous
Next
609
0
Filed under -
Guest Blogs

Most people when they get to the front of the room don’t dare show a hidden truth. Everything suffers because of that one mistake.

It only takes one small act of courage to change everything.

Realizing this one insight will help set you free.

We’re all hiding something

We all have a shadow self, a talent, a hobby, an interest, a fear, a story that we keep hidden from public view. Sometimes for good reason. We think it will limit our job opportunities. We think others will like us less. We think we’ll lose power. We think people will ostracize us because of it.

There are three pivotal points in a presentation where sharing something that you’ve been hiding will have maximum impact with your audience:

Hit your audience with a hidden truth right out of the gate.

I hate cocktail party chit-chat. I always feel like such a phony in those settings. And if I’m ever trapped in that setting without my wife by my side, I often disappear and either find a dark corner to hide out in or I hide out for as long as possible in the men’s room.

I’ve opened presentations before by sharing that secret. I’m not proud of it. I make my living communicating, but I would rather surgically remove my fingernails than make cocktail party chit-chat. As soon as I shared that hidden truth, I saw a room filled with people begin to nod their heads. They got it. The mood in the room softened. I had given a glimpse into one of my fears, my weaknesses. The audience softened its defenses immediately. We connected.

When you’re making a point of how to do something, why to use product X, why a certain approach works best, try sharing a hidden truth about how you learned this lesson the hard way.

I once spoke to a high school football team in a rough area of the town where I lived at the time and I wrote out the entire speech. Then I tried to read them the speech. First they yawned. Then they booed. Then they began to throw food at me. And I was only a few pages into the speech when the food started to fly. I felt pure panic wrap itself around me like an anaconda.

I have used that paragraph to share with audiences why I took the time to become a student of public speaking and presentation skills. Because I was terrible. And I was afraid I was going to die from doing it. In other words, I felt like most people feel. That’s very connective.

When I was on my book tour a couple of years ago, I shared with an audience the story of my father’s final conversation with me and my brother Jim.

My father somehow broke through the confusion of Alzheimer’s disease for a brief moment. He looked us both in the eyes and said, “Don’t wait. Life gets really confusing at the end. Don’t wait to live. Live now.” Then Alzheimer’s swallowed him again and all he could do was stare blankly at us as if we had never met.

The hidden truth has power

My hidden truth was how emotional that conversation still makes me – more than 10 years later. I was afraid to share that with the audience because I was afraid I would get choked up. And I did. I cried. I was afraid I wasn’t going to be able to get the genie back into the bottle.

What I discovered is I didn’t have to. By sharing a hidden truth, I connected at a level I could barely imagine with the audience, many of whom had found themselves in a similar dilemma with a loved one.

You have talents, experiences, fears, messages, beliefs, and insights that you keep hidden. You know it and I know it. The only thing I don’t know is what those are, but I know you have them. It’s time to let them out. It’s time to share.

You don’t have to push yourself to tears, but in your next presentation or speech, try revealing one hidden truth in your open, key point, or close. Do it in a way that makes you feel naked for a moment, laid bare in front of your audience. It’s a vulnerable moment. And in that moment you will make your most powerful connection to your audience. In the end, isn’t that really what we’re trying to do in the front of the room? 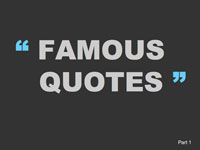 The Voice the World Needs to Hear

The Voice the World Needs to Hear

9 Tips to Design Presentations for Webinars

The Power of Threes in Presentations

5 Ice-Breakers for Your Presentation or Meeting
Australia Day Templates